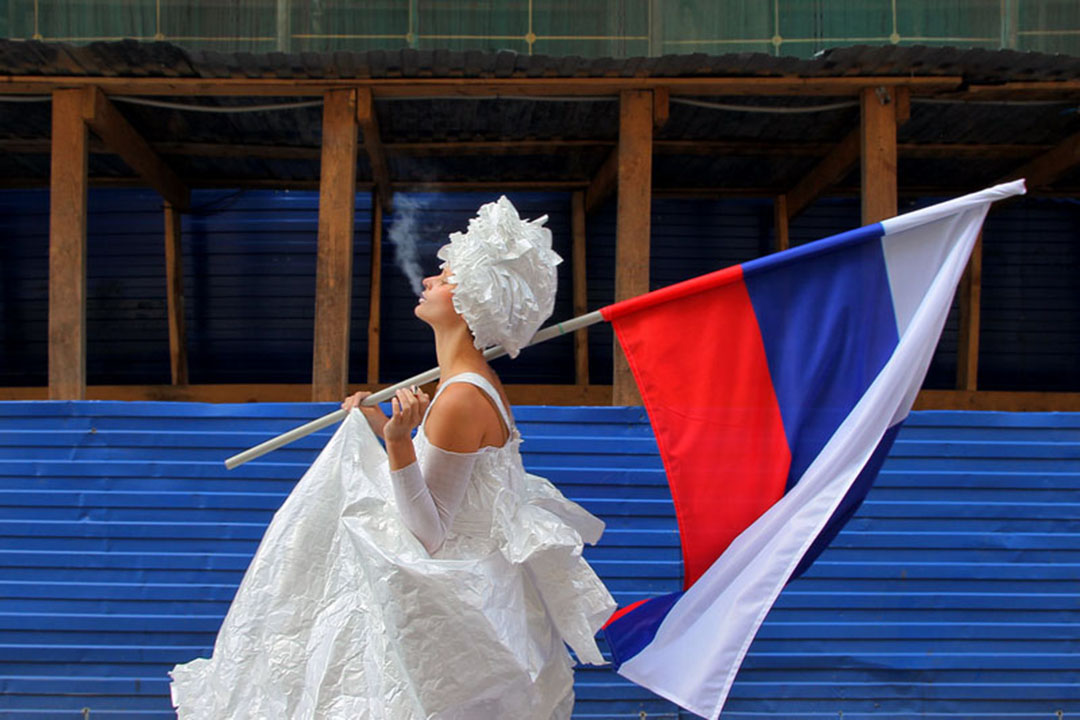 The Russian photographer Alexander Petrosyan has recently become very popular among the photography scene on the Internet. In his pictures, you will find almost every photographic expression resource, but you’ll also find his very own style in every one of them. The grotesque, the decadent, but also the happy and proud Russia are very important for him. In this interview, we ask him about composition, differences between documentary and street photography, color or black and white… There is very little information on the internet about you, what is the story behind Alexander Petrosyan? (place of birth, things that influenced your life, how you become interested in photography…)

My story is very trivial (like millions of other photographers). While studying high school, I received a camera as a gift from my father for my birthday. And since then, somehow my life was directly or indirectly related to photography. In this way, there have been Breaks and even kickbacks, but in 2000, is already quite an adult, I finally realized that I was much more interested in the creative component of this profession. -I throw all my commercial photo projects, I again became an amateur photographer and remain to them until now, despite 15 -years of experience of gas Photographer and photographer. From portraits to landscapes, we can see a lot of different disciplines among your work. Do you think it is smart to just do one kind/style/discipline of photography or that multidisciplinary approaches are richer and make you a better photographer?
I think that it’s worth trying all kinds, genres, and styles, at least in order to more clearly imagine the vector of their interests and find a place in all the diversity of modern photography. In the end, the truth is simple: do what is genuinely interesting! Since interests are periodically shifted, genre-stylistic preferences also change. Since Street Soul Photography is a “street photography” dedicated website, I must ask you: why do you think that so many people say that “Documentary photography” CAN’T be “street photography”? It’s maybe just about marketing and self-selling strategies or maybe that the so-called street photographers need to name the “thing” they are doing?
I do not consider myself competent enough in the fundamental issues of photography, in this case, there are works by Susan Sontag and other titans of theory, but in my humble opinion street photography is a fairly broad phenomenon in order to cram it into some rigid framework. It would be because of the difference in stylistic orientation. The author can focus on the formal side: to catch interesting combinations of shapes, objects, lines, light, color while demonstrating how skillfully and skillfully he is able to operate with the expressive language of photography. Completely different, when photographic asceticism is more than compensated by the internal drama of the plot, where something unprecedentedly small, localized, and seemingly insignificant, suddenly is read something immeasurably greater, deep and eternal! The second case is closer to me, although I do not at all reject the values of direct, as in music, effects of the image, directly on the subconscious level, bypassing the narrative. Now the big question: black and white or color? what makes you feel more comfortable and what is the key factor to decide which one you choose?
Honestly, the answer to this question is plainly vulgar. Initially, I was engaged in black and white photography, because of the underdevelopment of color in those days. Then, with the advent of mini-laboratories, I attacked the color, not really realizing what its meaning was. And finally, with the appearance of the figure, the whole question was reduced to a simple solution (except in cases where black and white is initially and fundamentally removed): all the files are removed in color, for the reason that they buy mostly only color images. And for my personal portfolio, I follow the well-known advice: if the frame in black and white looks, at least, no worse than in color, the color is redundant. You have a very unusual and rich way of composure. You compose with colors, with diagonals, with people, with close and far objects on the same picture… you use everything! and still, manage to keep rich storytelling. Do you see the story first and then choose the composition or vice versa? What matters more: the story or the composition?
Initially, for me, the most important is feeling; Photos «from the mind» – not mine .. Before you release the shutter, you yourself must be at least not indifferent, the stronger this feeling, the more the plot inspires the search for and experiments in its implementation, and this happens not so much consciously as intuitively.

So… we have the story, the composition, the objects… is there something you miss in your pictures? What you hate and what you love to see on the pictures once taken?
The most important and valuable thing in photography for me is that it is impossible to calculate and simulate in advance. Simply put, all the best pictures are obtained when something suddenly went wrong, as planned, but unexpectedly and awry! Therefore, the most valuable thing in a picture is always a gift from above. Yes, a gift! For diligence, for searching, for indifference, for anything else, but – a gift.
Therefore, I’m absolutely not interested in any, even masterfully done works, if they do not have this x-factor .. Amsterdam, Israel, the Balkans, Tenerife, New York, South Africa, Austria, and many more places. How did it come that you traveled so much these past years? Which city did you enjoy more on the photographic site?
These were, basically, business trips, and very short-term.
For 2-3 days you hardly have time to understand a new place and remove something worthwhile, except for tourist sketches .. And in itself, as it is not funny, I have never traveled anywhere; Perhaps this period is still ahead of me!) Many of my colleagues prefer to conduct their master classes on street photography in places where it is easy and productive to shoot: for example, in some Indian or cube, where people practically spend on the street a large Part-time, more texture, more colorful characters, etc. Personally, I was not there, I do not know. But from what I saw most of all I liked New York, where I visited a couple of times for several days. For some reason, I felt at home there: the streets and streets in Manhattan, just like on my native Vasilievsky Island in St. Petersburg, a lot of visitors who also speak poor English like me, and most importantly, it’s one of the best In the world of places for streetlife, because there, as in ancient Babylon, an incredible mixture of everything and everyone, while almost no one before you, shooting, no business! Most of your work is from Russia, which seems logical since you are more time there than anywhere else. Do you think that the grotesque point of view you transmit through on some of your pics does reflect Russian society? Which are the main differences between the countryside and the big cities?
Yes, I’m closer to this perception of local reality, otherwise, I probably would have gone mad long ago. A society where everything is wrong, black and white are changing places, the norm is considered insanity and vice versa, it looks tragicomic, it’s not for nothing that my second book of local photographs is called «Kuntskamera». But it’s not boring here! But, for example, in the neighboring prosperous Helsinki, in Finland, everything is different: comfortable, calm, properly arranged normal civilized life, but in terms of shooting, I feel almost helpless there. In general, I’m inclined to think that my stay in this place and time is not at all random since it’s so clinging to me. For last but not least, what are Alexander’s next projects? Can you tell us something about what you are going to publish soon?
Absolutely not knowing yet the answer to this question, after all, destinies often conduct us completely not there where we gathered originally. Therefore, I prefer, as in the old saying, «do what you must and whatever happens». One thing I know for sure: while it turns out, I have to shoot!

You can see more of Alexander’s work at his personal website.