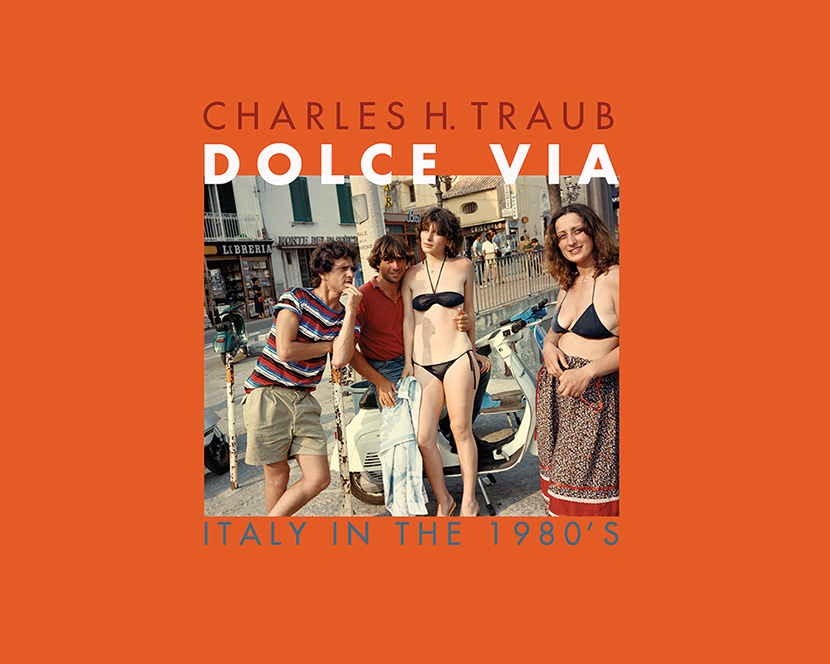 I am quite convinced that the theatre of real life is a far more interesting narrative than anything that can be constructed or appropriated – Charles H. Traub «Dolce Via» is a photo book that shows us Italy in the 80’s. This book is a good example for all those who struggle in finding the «essence» of a city/country. It’s inspiring and a good way to keep that decade in mind !.

Find out why he traveled to Italy or why he used a medium format Plaubel Makina 67 to take his pictures !

At the time I was working as a freelance artist and photographer. I was represented by the Light Gallery in New York, and as well did corporate and editorial work. Italy was an escape from routine, but the place that also fed my energies and my photographic musing. I have been a photographer since 1967. By and large, I see myself a «real world witness» image maker. That is, I am interested in what ever happens in the passing show of real time, real space, and real events. That is not to say that I am a conventional documentarian, I am certainly not a journalist, and I don’t hold that there is any truth to any of it, except my own truth. All of that said, I am interested in people anywhere and everywhere, anybody and everybody. I am quite convinced that the theatre of real life is a far more interesting narrative than anything that can be constructed or appropriated. You are from NY, why you decided to travel to Italy? Was it a photographic decision ? Did you have a flair for Italy on those days ? Why not an other country ?

With the emergence of contemporary Italian design, an appealing food culture, and a lifestyle layered in its great history, Italy was a destination for anyone who sought «the good life. If indeed everything is to be read on the surface, -to paraphrase Oscar Wilde, Italy was the place for me to manifest that discovery. As a freelance artist and photographer, the complexities and layers of its culture provided endless incidents and anecdotes to be recorded. The Italians have a word for it; leggerezza.

Italy represented, in the late seventies and early eighties a remarkable stage for my witness. I traveled there often for four or five years with the simple intention of photographing its remarkable scene. Back then, the cities and landscapes were relatively unspoiled by the trappings of globalization. Fast food and chain stored were an anathema; blue jeans, tattoos and t-shirts, unseen. Italy had style! It was still a reasonably homogeneous culture, though it aspired in an ironic way to try and repeat its past. After all, there, is perhaps the only civilization that produced two great epochs that would vastly change western thought; the Roman Empire, and the Renaissance.

Were the photos on your book token with a Plaubel Makina 67?. It was a terrific camera years ago who just a few could afford. But, isn’t it to big for street photography ?. Why not 35mm like we could find on a Leica or similar ?

The Plaubel Makina relative to a Leica was not so expensive, I was one of the first in the United States to have one. I bought it because it was a light rangefinder, it was portable but medium format.

La Dolcia Via is a colour book. But other work from you [like “US Grant”, “Early Works” or “Cajun Documents”] is in B&W even being landscapes which are usually in colour. What criteria do you follow to choose B&W or Colour?

Since 1977 I have basically been working in color. As I said before I consider myself a “real world witness photographer” (my term). As such, one is recording more or less the reality of what one sees, that is, my reality! Thus, it follows that if one is going to be recording in the real world, one needs to capture the color that composes that world. My earlier work, and now my latest project: No Perfect Heroes: Photographing Grant are not so much document but rather subjective expressive gestures.

When we see the final index of places where the pictures in the book were taken in Italy, Which differences did you noticed while taking pictures in different places across Italy ? You noticed different life styles between North and South ?

Despite the fact that people tend to be more gestural and facially expressive in the south of Italy, at least back then the joy of expressing ones style and inhabiting the street as a place of being was really not very different in Italy.

Which was people’s reaction when you took such direct shoots ? Do you think it could be done again nowadays in Italy ?

Everyone was on display on the streets of an Italian city, like Rome or Naples. The mid day break or the evening walk were for putting oneself out there; for escaping the drudgery of daily routine. Everybody wanted to be seen, and are delighted to be acknowledged for their style, their physicality, and indeed their sexuality. Few resisted the camera. Sexuality belongs to the individual, and despite any fleeting beauty, is still theirs to show. Having visited Italy a number of times since, and most recently of a year ago, I am a little berth that the Italy of Dolce Via is gone. The Vita is no longer, the leggerezza is dissipated, and anyone and everyone seems to move and look like anyone and everyone anywhere and everywhere. The world which once was a salad bowl of unique edibles is now a smoothie. Your pictures have an excellent quality and transmit the italian passion, more or less like spanish people, as a mediterranean country we live more in the streets and are accustomed. Has this fact make you take your pictures easily ?

The Mediterranean life is certainly conducive to picture making like myself who wants to wander streets in the best of light, seeking a stage for the passing show of human expression.

Which differences did you notice between your less “Street Photography” work ? or “Early Work or Lunch time” where your portraits are more spontaneous and looking for the same plane ?

I have never understood really what the phrase street photography means, it’s a kind of misnomer. I have and always will be a person who looks and records that which I see and experience. The better term for a street photographer may be a walking photographer, who photographs inside, outside, here there and anywhere.

In your book we find a foreword written by Max Kozlloff and at the end a surprising dialogue between a Street Photographer and his muse written by Luigi Ballerini. Which paper had this too mans in your project ? Did this make your relationship stronger?

These two writers are two of my best friends and long-term colleagues. They are great writers in their own fields, celebrated thinkers and passionate about art and life. Their relationship always makes me brighter. Q: Which is your next project ?

My next project is to publish No Perfect Heroes: Photographing Grant, a visual eulogy to perhaps the greatest American general, leader of the union army during the American Civil War, Ulysses S. Grant.

Questions and edition by José Luis Gea and Fabián Spura.